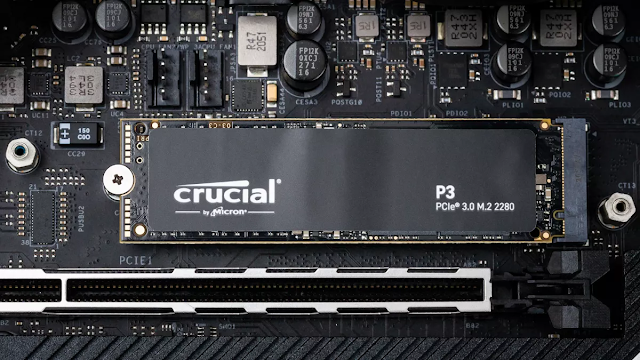 The Crucial P3 is the PCIe 3.0 sibling of the P3 Plus. It utilizes the same Phison E21T controller and is similarly paired with Micron’s 176-layer QLC flash. With a starting price of $74 for 1TB or $147 for 2TB, it’s intended to compete with the best SSDs in terms of value, with an emphasis on offering higher capacity options.

Being limited to PCIe 3.0 is not a huge deal – this mainly restricts maximum bandwidth, which on a drive of this caliber means sequential file transfers. In practice, this is not very relevant as a single-threaded transfer won’t much exceed the interface’s speed, anyway. Like the P3 Plus, the P3 is surprisingly performant and efficient, which is particularly attractive because Crucial backs this with the same warranty.

The P3 does face different competition. Most PCIe 3.0 drives continue to use older controllers and flash which can make them less efficient while restricting maximum capacity. The SK hynix Gold P31 is an exception, a later entry which went with more efficient hardware: a four-channel controller and newer flash. That drive also checks the boxes for DRAM and TLC. Intel’s 670p, which has QLC and DRAM, is more of a direct competitor. However, Solidigm’s formation makes that a bit moot as the drive will be phased out for the P41 Plus. DRAM-less drives like Crucial’s P2 feel downright outdated.

The Phison E21T has proven to be a capable controller, as demonstrated in our Silicon Power UD90 review. Micron’s new QLC does not appear to break any barriers but it is certainly better than their previous 96-layer generation 4-bit flash. What’s more interesting is the ability to get this drive at up to 4TB, and a reasonable price to boot.

Weighing PCIe 3.0 and 4.0 drives against each other when making a purchase can be a daunting enterprise, especially if your platform is older. Does the P3 make the case that capacity and “good enough” performance, on the cheap, is the perfect pairing for PCIe 3.0? 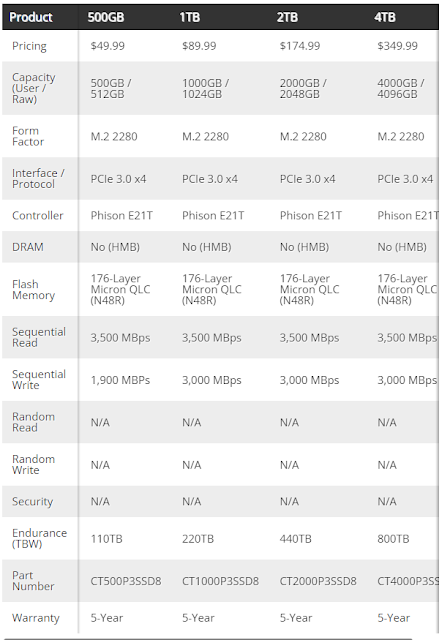 The Crucial P3 is available at 500GB, 1TB, 2TB, and 4TB. As is common with QLC drives, the smallest capacity is not ideal. This drive reaches peak sequential performance, 3.5/3.0GBps for read and write respectively, at 1TB. The 2TB and 4TB SKUs are the most enticing as this is likely to be a secondary drive for storage or games. It can be challenging to find affordable M.2 NVMe SSDs at 4TB that aren’t priced into outer space. The smaller capacity options are still nice to have for a budget build or upgrade.

Crucial wisely went with a 5-year warranty, although the TBW leaves something to be desired. It varies from 200-220TB of writes per TB of capacity, which is on the low side. This isn’t surprising for a DRAM-less QLC drive and you likely won’t exceed it within the warranty period. That being said, it is still about half that of the older P2. We suspect the actual endurance is far higher but Crucial wants to segment its drives carefully. It’s a fair point because you shouldn’t be doing a ton of writes on a drive like this.

MSRP pricing on the P3 isn’t particularly compelling except maybe at 4TB. However, the drive has already been on sale for a steep discount at multiple capacities including that one. Crucial clearly intends for it to be a budget drive that you can impulse buy, whether for a cheap upgrade or for storage extension. This includes for laptop use as a drive like this is bound to be efficient, particularly in comparison to older PCIe 3.0 options.

Crucial provides downloads on its site to make using the P3 more comfortable. The Crucial Storage Executive acts as an SSD “toolbox” which includes pertinent information about the drive and its health, plus auxiliary functions to help maintain the drive. Crucial also links to Acronis True Image for Crucial which is useful if you need to clone or backup a drive when installing the P3.

A Closer Look at for Crucial P3 SSD 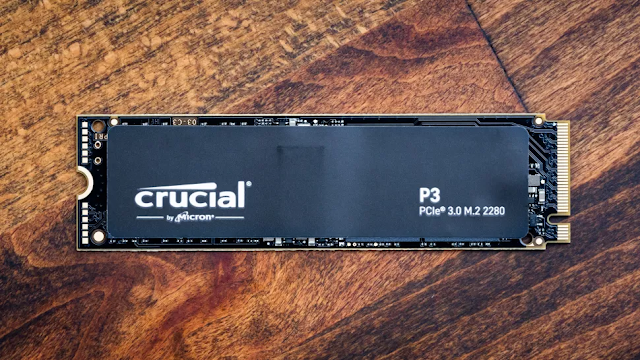 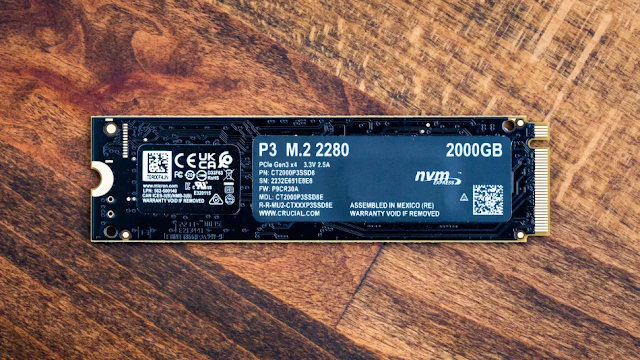 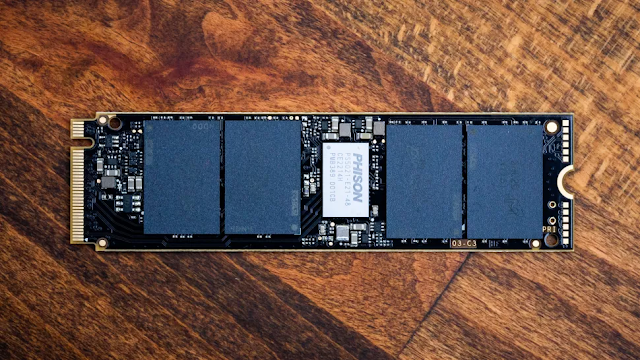 The Crucial P3 looks a lot like the P3 Plus. In fact, it looks identical except for the labels. The front label does tell you if it is the P3 or P3 Plus, while the rear label also provides additional information about the drive. The drive may be rated for 8.25W, but we can safely assume it won’t pull anywhere near that much. Under the front label we see the controller in-between two pairs of NAND flash packages with no DRAM present. 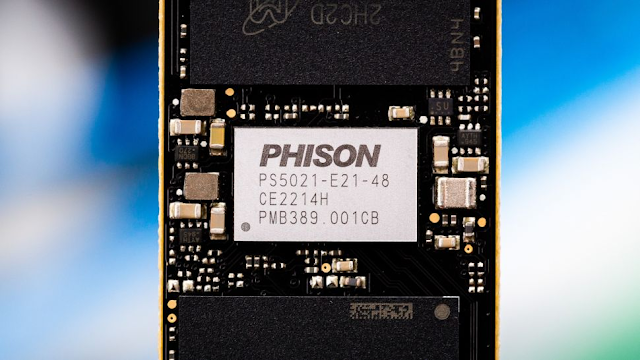 The Phison E21T controller is the same one found on the P3 Plus. Or is it? While the P3 Plus has a PCIe 4.0 interface the P3 is relegated to 3.0. This distinction is somewhat similar to that between the Phison E19T and E15T controllers, 4.0 and 3.0 respectively, but the E19T is a 28nm part with only a 1200 MT/s bus. Controllers in a smaller process node are often more efficient, more powerful, or both, and the faster 1600 MT/s bus on the 12nm E21T allows it to hit higher speeds with more bandwidth.

1200 MT/s is sufficient to saturate PCIe 3.0 with a four-channel controller, though, as was originally made clear with the SK hynix Gold P31. This allowed the drive to be unusually efficient when paired with new flash. The best mid-range 4.0 drives tend to be 1600 MT/s with even newer flash, which includes the P3 Plus. They are all efficient and more than powerful enough. So what does this mean for the P3?

Assuming the P3 is using the same hardware as the P3 Plus, as appears to be the case with our review samples, then some trade-offs are made. The P3 cannot hit the same bandwidth peaks, such as with workloads at higher queue depth, and the interface may also preclude it from PlayStation 5 (PS5) use. On the other hand, it effectively has a slower bus with lower peak demands on the controller which suggests it could be more efficient. As the P3 is a bit cheaper than the P3 Plus this is an important consideration if you are prioritizing capacity or have a 3.0 system. 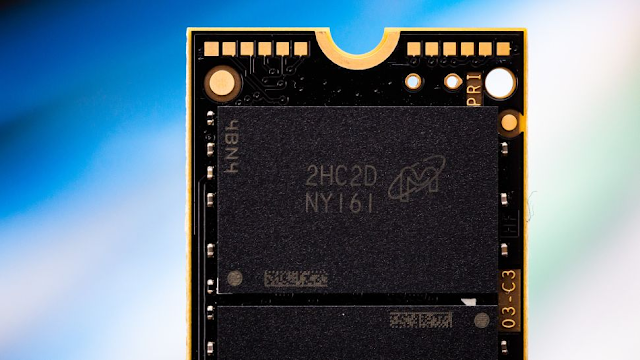 The flash is labeled NY161 which is the same as used on the P3 Plus. This is Micron’s 176-layer QLC, in this case with four 4DP/QDP packages that contain four 1Tb dies each. This QLC uses an architecture similar to Micron’s 176-layer TLC, being distinct from what they used at 96 layers in tandem with Intel. This design must still prove itself but it should be comparable to 176-layer QLC from other manufacturers.