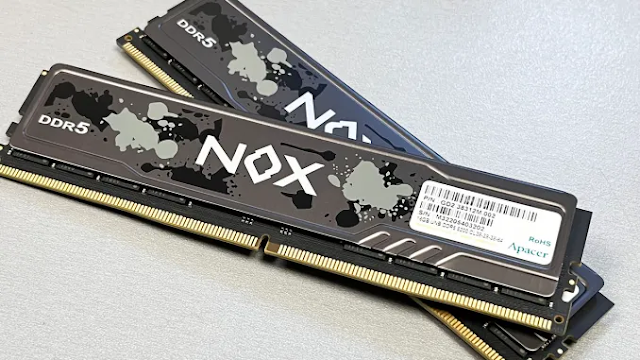 In the coming weeks AMD will be launching new chipsets for their new AM5 platform supporting DDR5 ram. This is really exciting news. However having said that, Intel have already launched their 600 series chipsets last year with DDR5 support, while for AMD, it will be the first step into the DDR5 generation. Regardless of your preference, you will need new RAM. Now that DDR5 kits are already widely available on the market, deciding the right choice for your memory needs is not always easy.

In this review, we will present one of the more affordable DDR5 kits available, the Apacer NOX, which is rated at DDR5-5200. The memory kit is designed to deliver high performance and be compatible with all new motherboards that support the latest memory standard.

Stay with us to determine how much to expect from the 32GB DDR5-5200 Apacer NOX memory kit.

Leaving The Rest Behind

Performance. Capacity. Stability. Efficiency. Apacer’s NOX DDR5 gaming memory module takes these all to the next level. The competition just can’t keep up.

A Splash of Darkness
NOX is a dark goddess with a minimalist design. The alloy heat sink delivers top-notch heat dissipation. And its eye-catching appearance really makes it stand out. 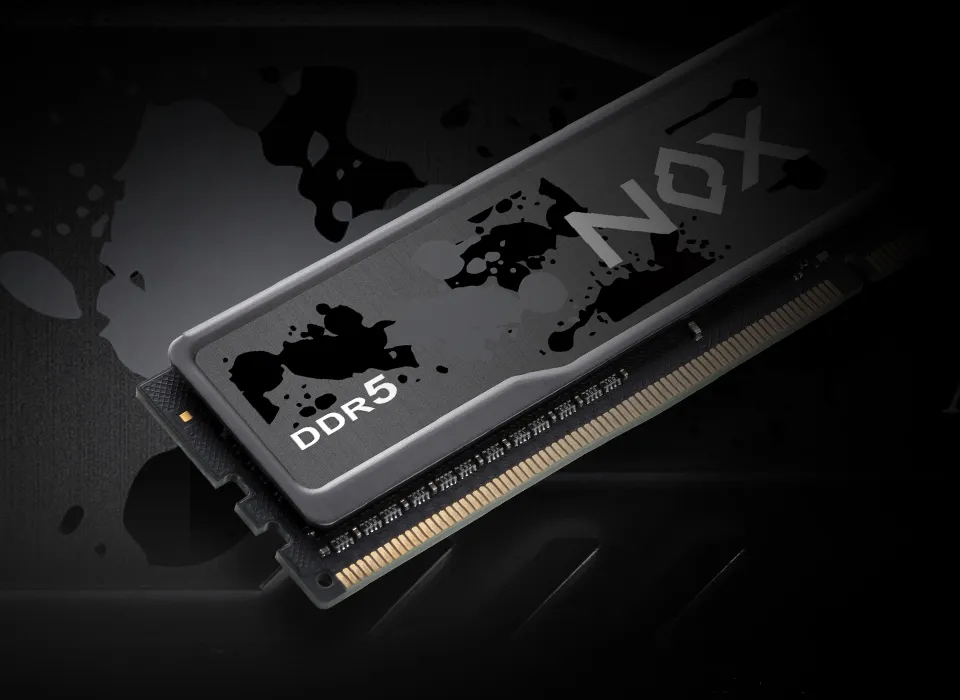 True synergy is delivered by the combination of the heat sink’s dissipation and the power management chip’s efficiency. Less power consumed means less heat to remove. This is where efficiency meets stability. This is the way forward. 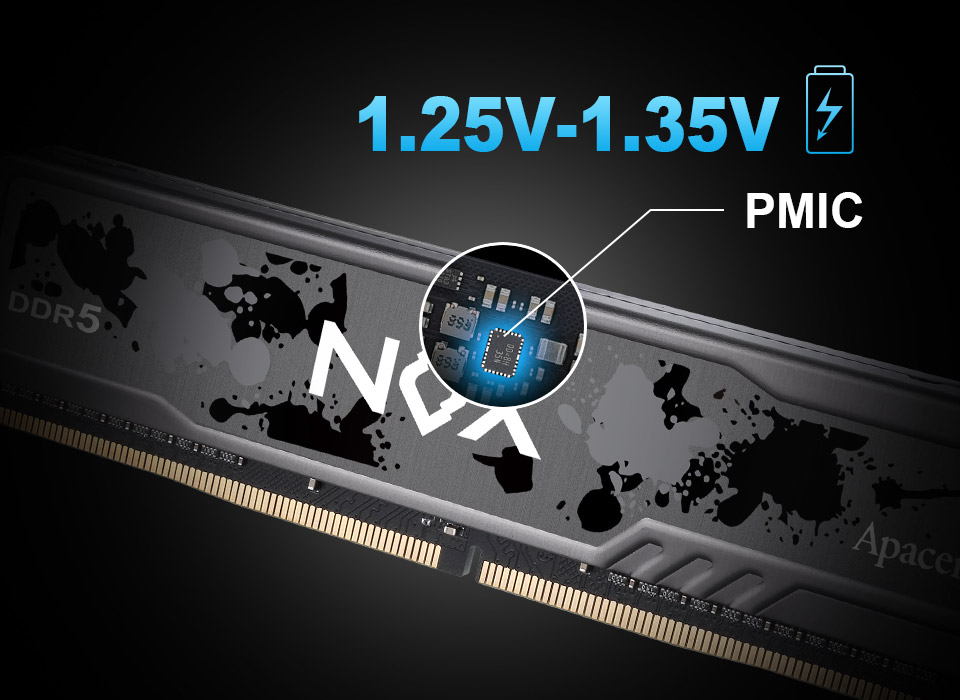 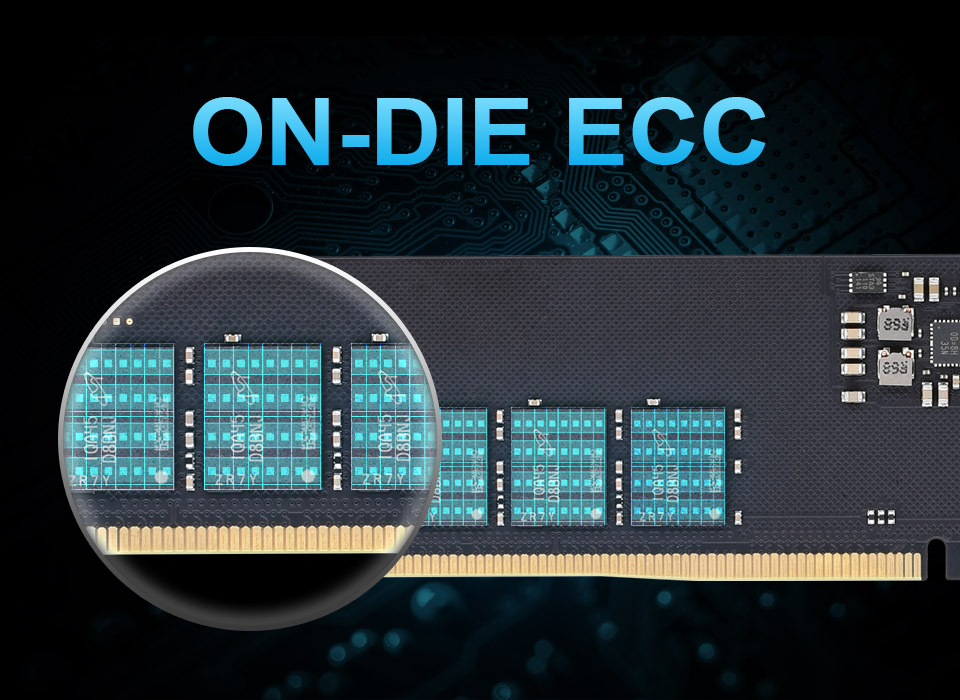 Supporting Intel® XMP 3.0, with one click of a button, users can easily overclock their system without making any manual adjustments to BIOS parameters. 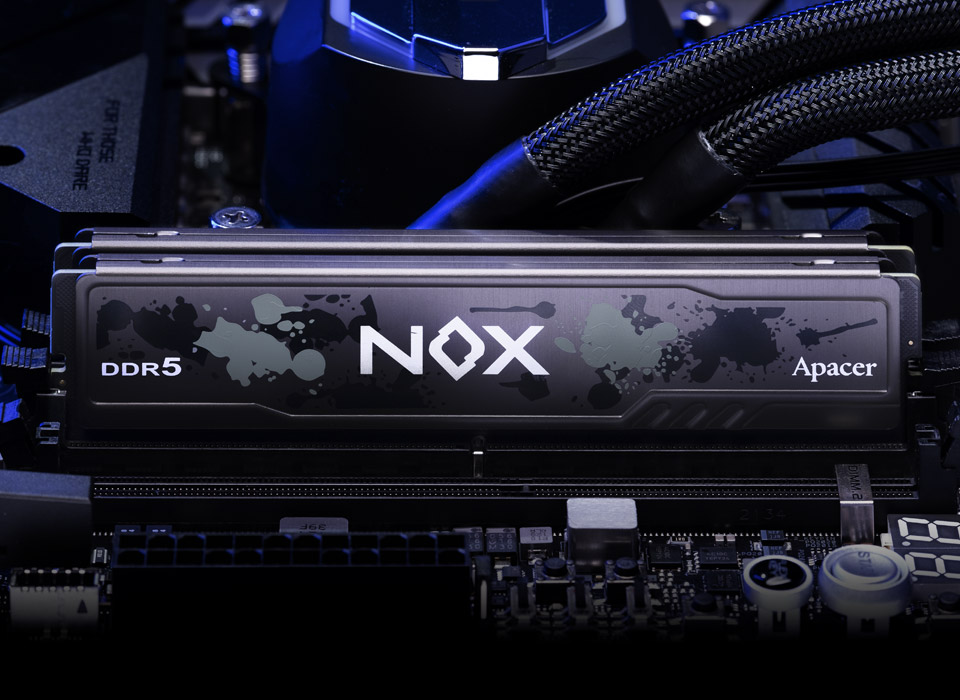 Based on Apacer’s long-term experience in the industry, the meticulously screened DRAM ICs ensure excellent stability and compatibility with major motherboards. 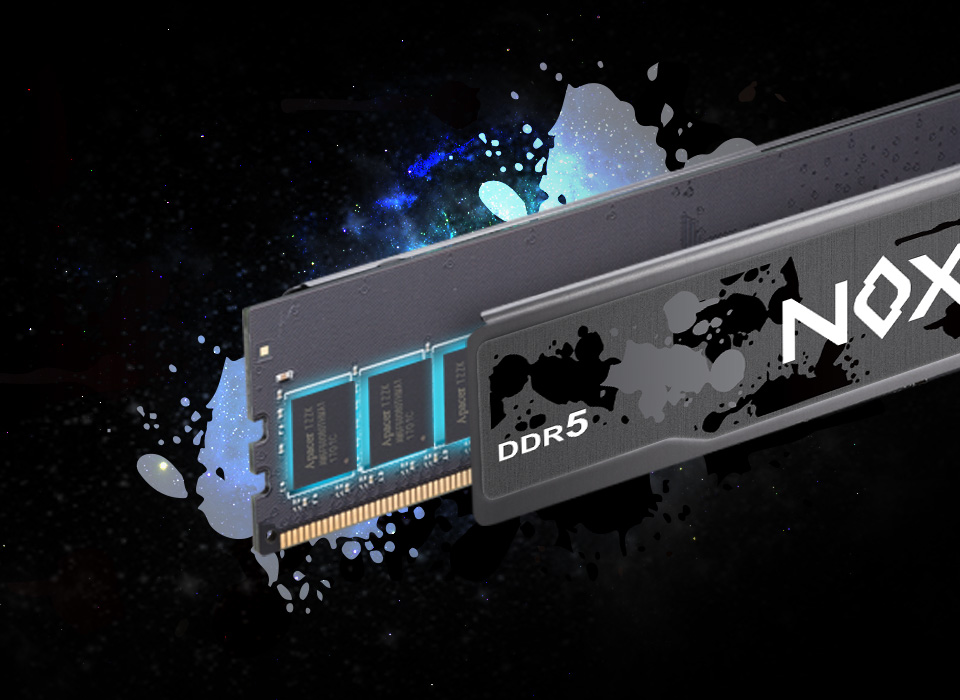 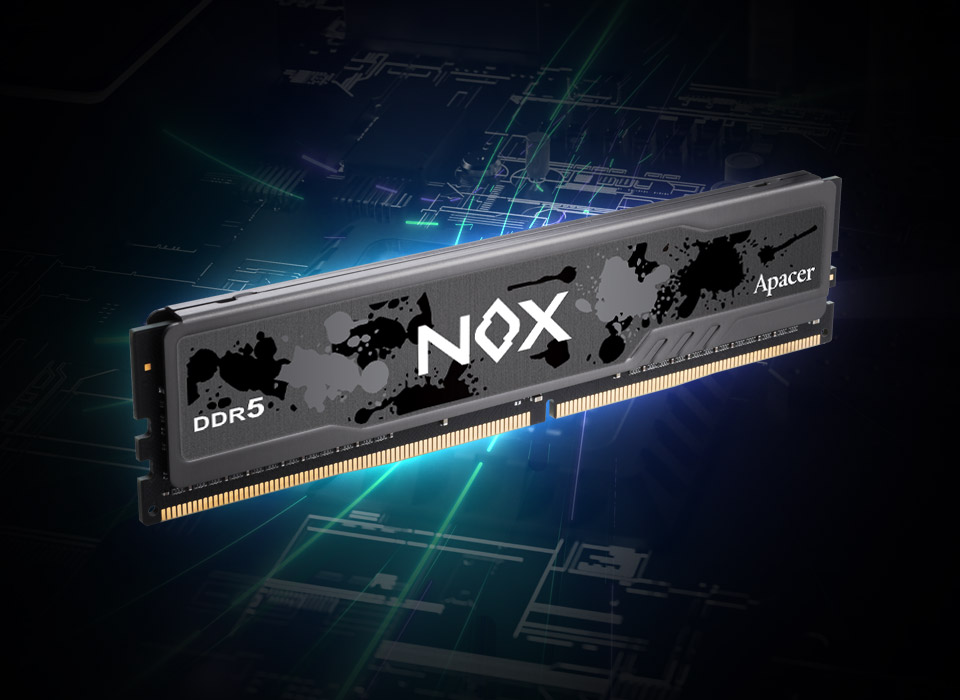 Ensuring its stability with all motherboards on the QVL (Qualified Vendor List) through multiple compatibility verifications of mainstream motherboard manufacturers. 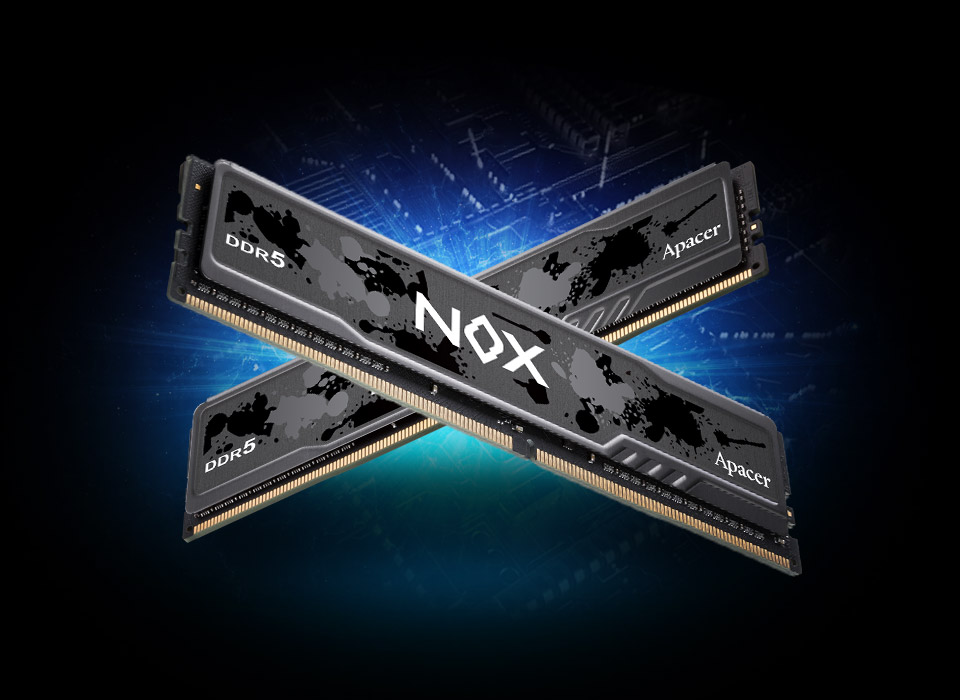 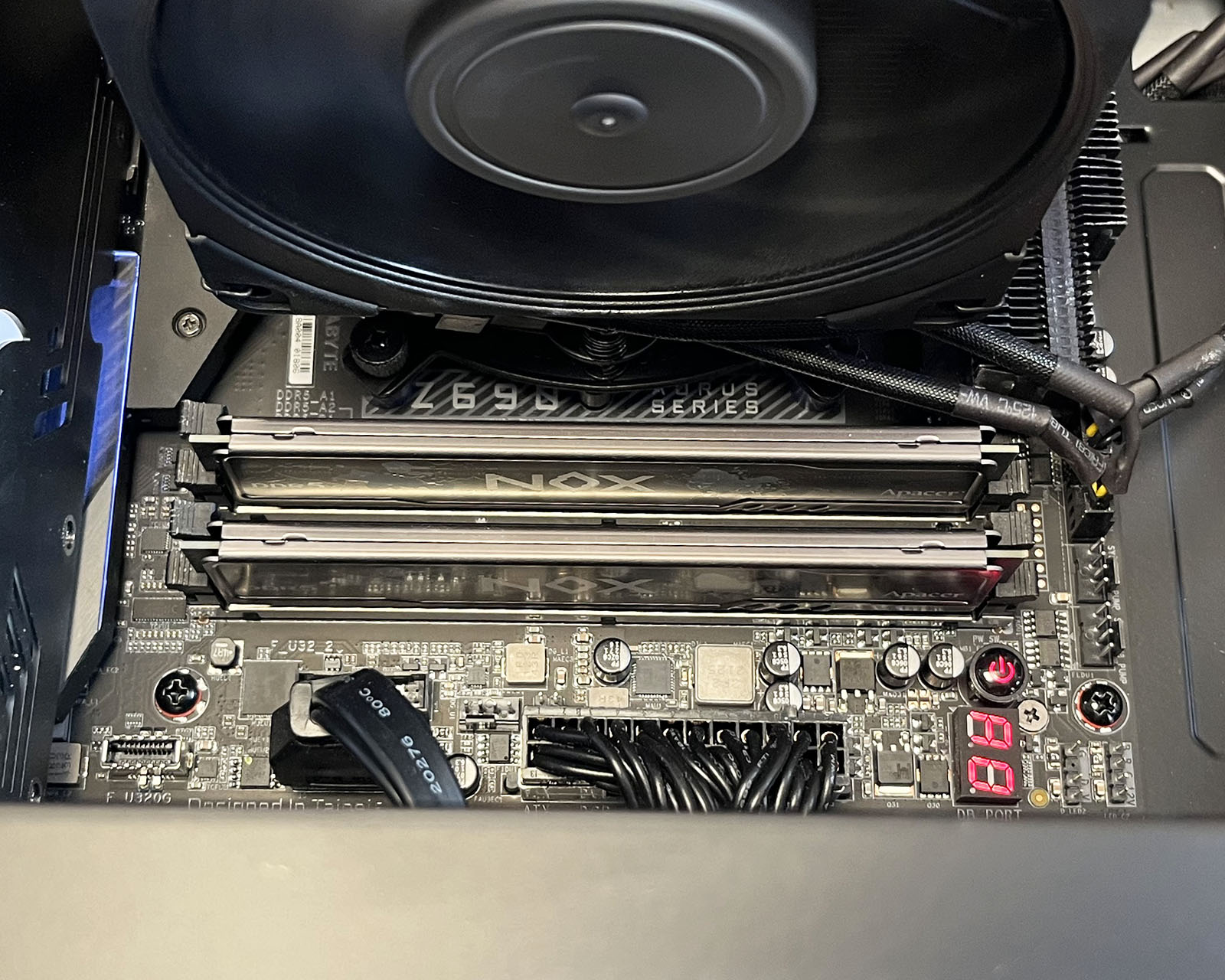 The NOX DDR5-5200 memory kit has one XMP profile at DDR5-5200 and primary timings of 38-38-38-84. The profile has a programmed voltage of 1.25V VDD/VDDQ. Since it’s using Micron IC, these voltages are already optimal for overclocking. We won’t use much more in our tests as it simply doesn’t help.

Below you can see a whole timings list that can read ASRock Timing Configurator. 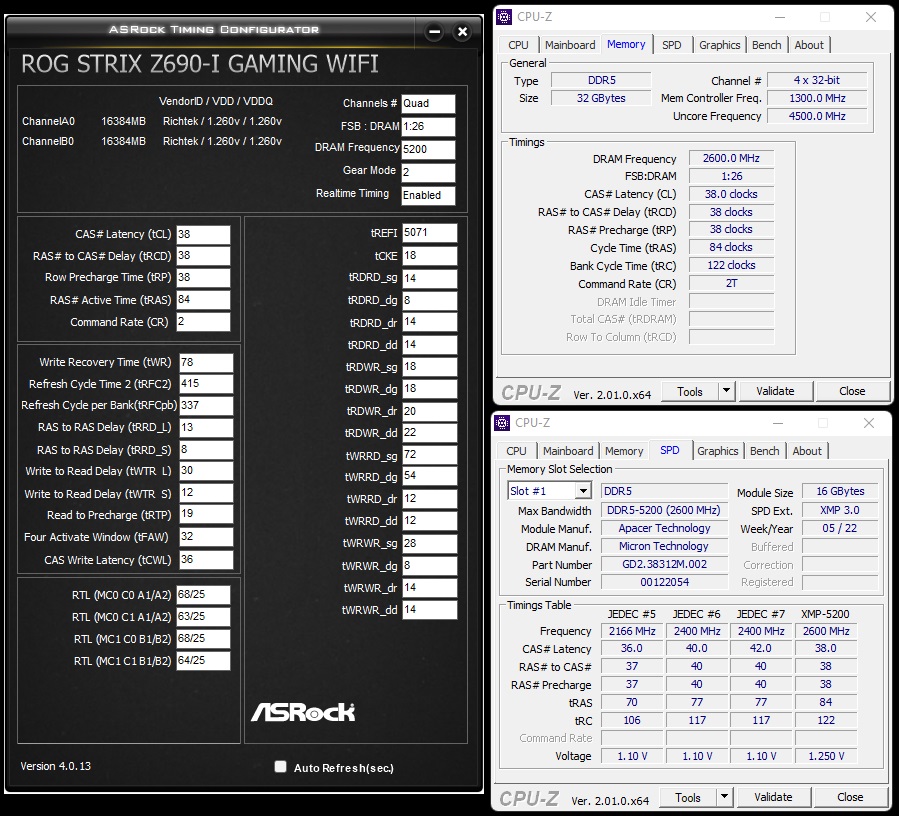 The tested memory kit has no problems with stability on ASUS, Gigabyte, and MSI motherboards with the Z690 chipset. We were using the ASUS Strix Z690I Gaming WiFi motherboard for performance tests, while additional tests were also performed on Gigabyte Aorus Z690 Master and MSI Z690 Unify-X. On all these motherboards, results were similar.

Below is a screenshot from the AIDA64 System Stability Test. As you can see, there are no problems with stability. The memory kit passed multiple other tests, so there was no need to keep the stability test for much longer. 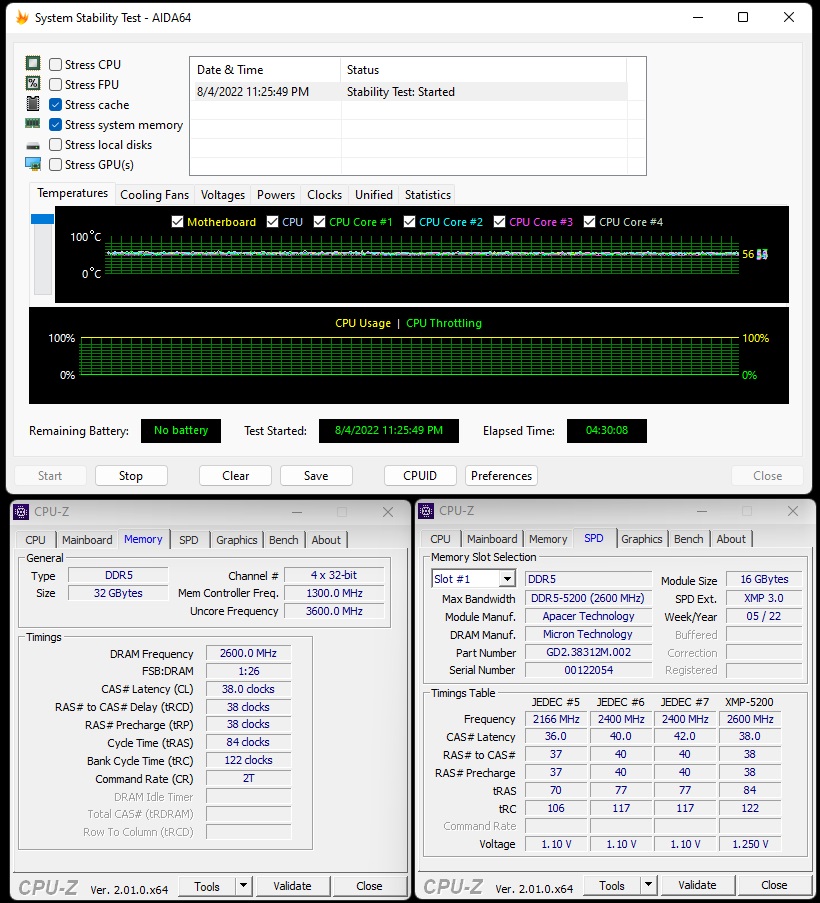 So far, so good. Now let’s take a look at the product itself.
Package and its Contents

Apacer NOX memory arrived in a retail package which is a bit larger than the typical flat box of most other brands. The package is well described with all the features and main specifications. There is also info about support and various safety certificates. The box has a window in front and back so we can see memory modules without needing to unpack them. 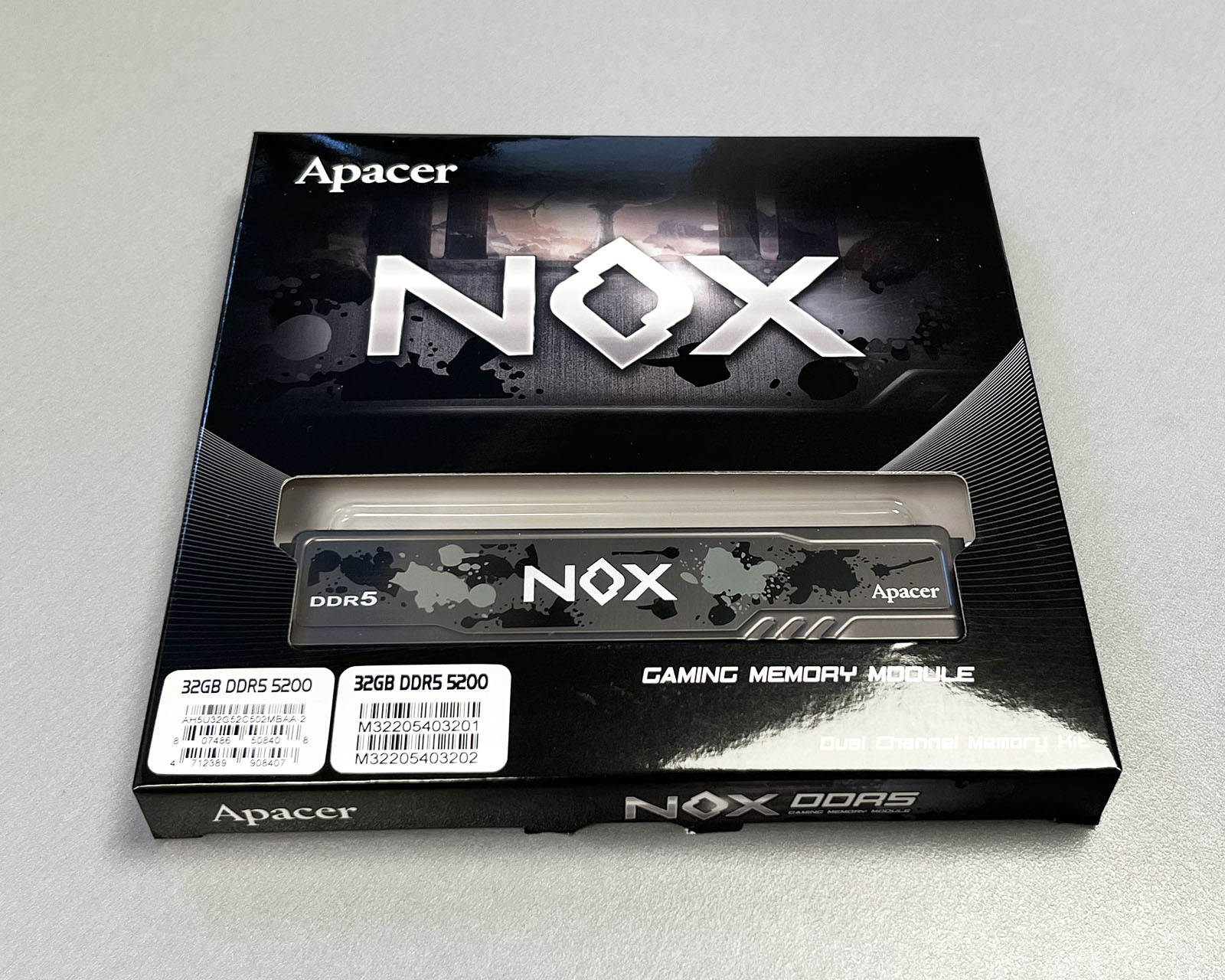 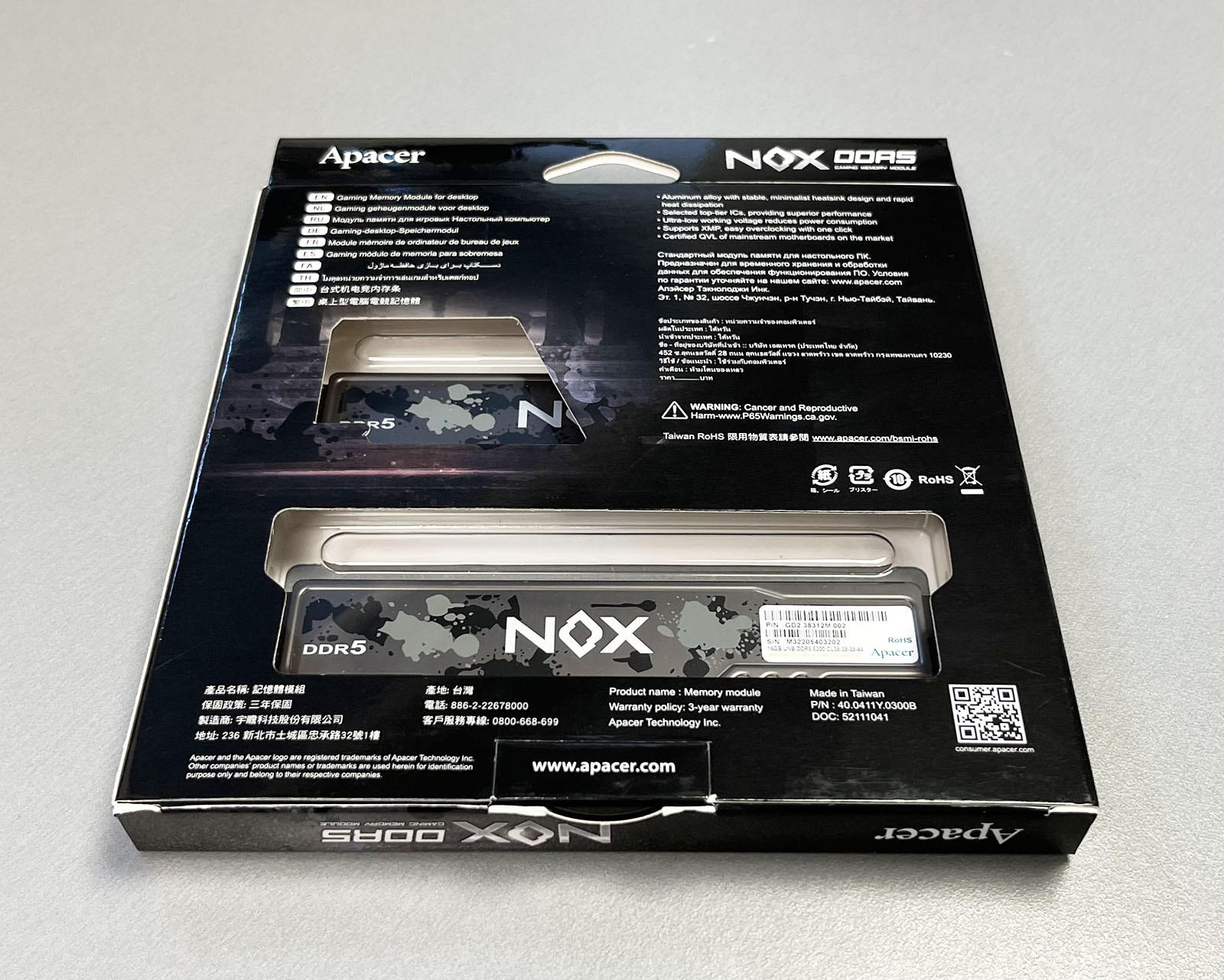 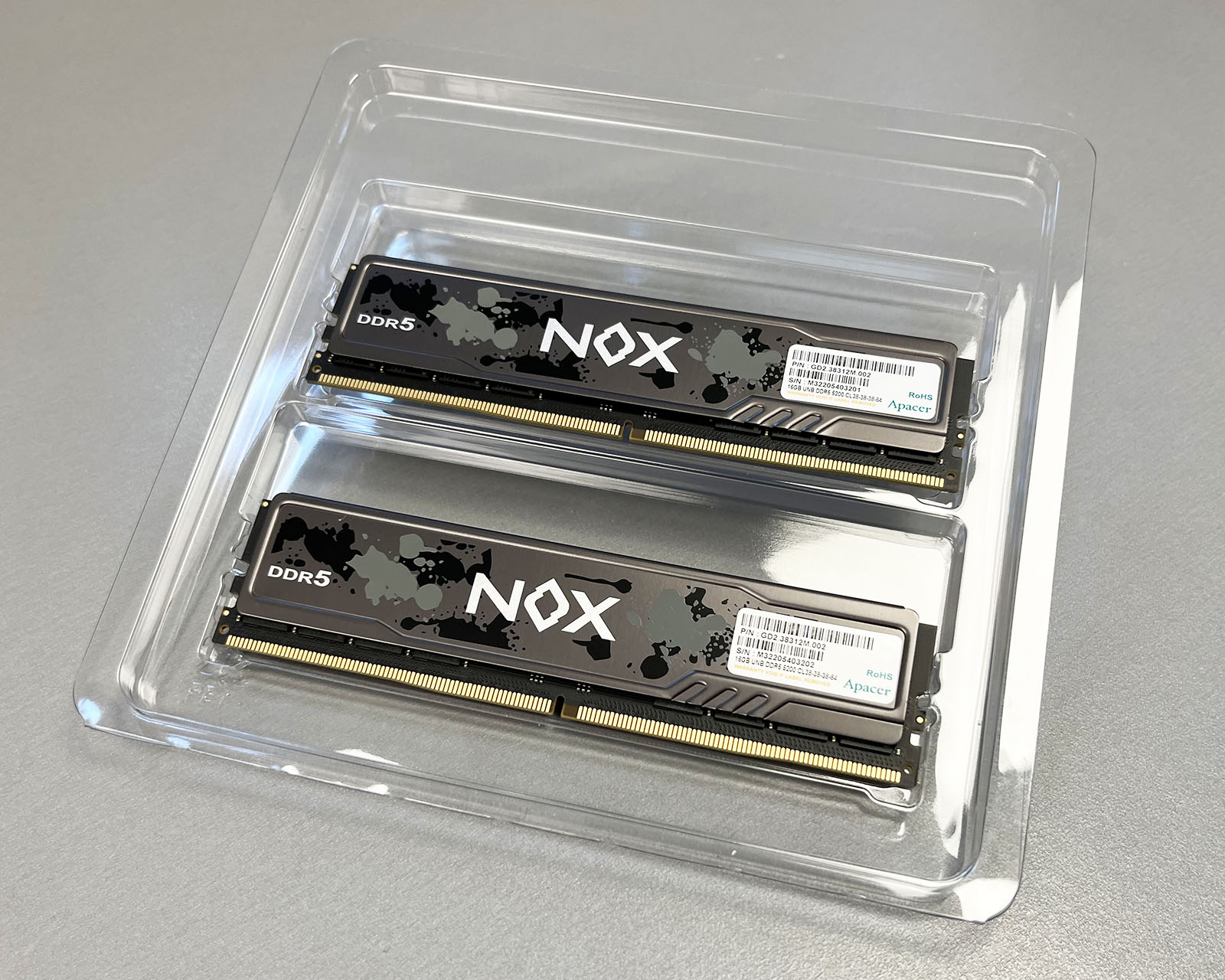 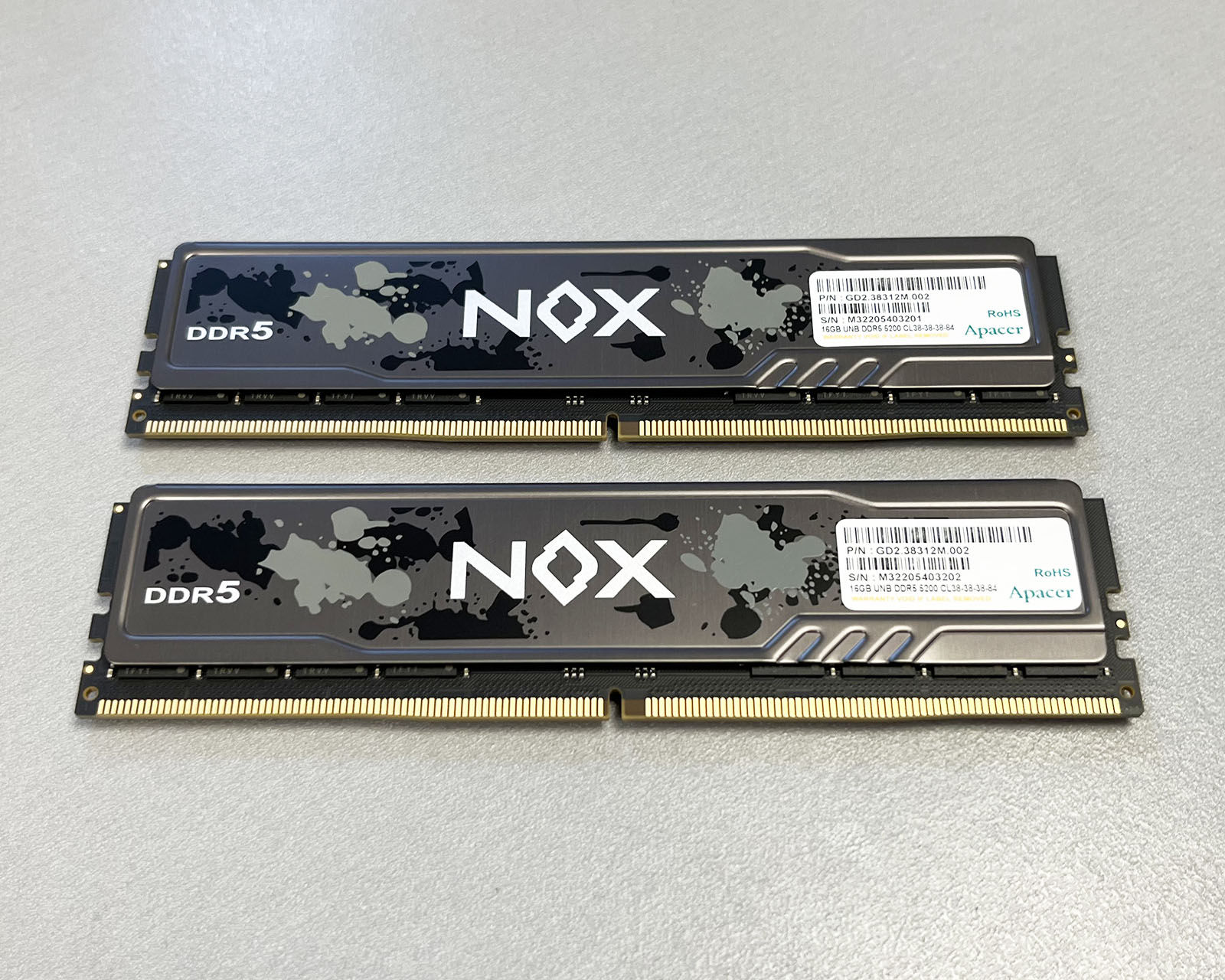 Inside the box, we will find two 16GB memory modules rated at DDR5-5200 CL38-38-38 1.25V. This isn’t the highest specification as Apacer offers DDR5 modules up to DDR5-6400. However, it’s more than enough for most users, and the price is expected to be significantly lower. Since prices are falling, it will soon cost about as much as above-average DDR4 kits.

The modules are standard height, and some users would even say low profile. Others remember that even lower modules were in previous RAM generations. Since PMIC is on the PCB, it will be much harder to do on DDR5 modules. Heatsinks are not large but are just right for this specific memory kit, as low operating voltages won’t cause too much heat. 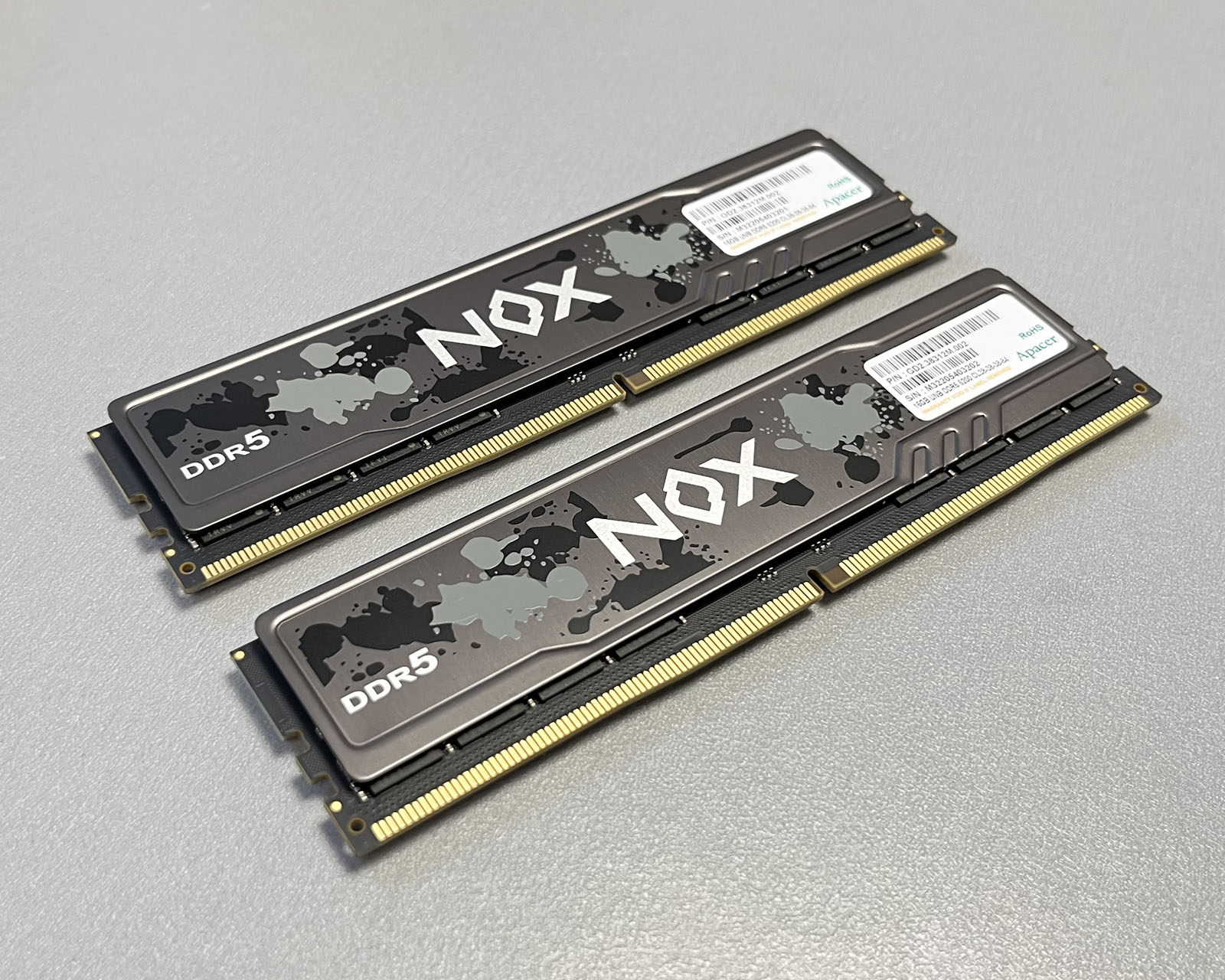 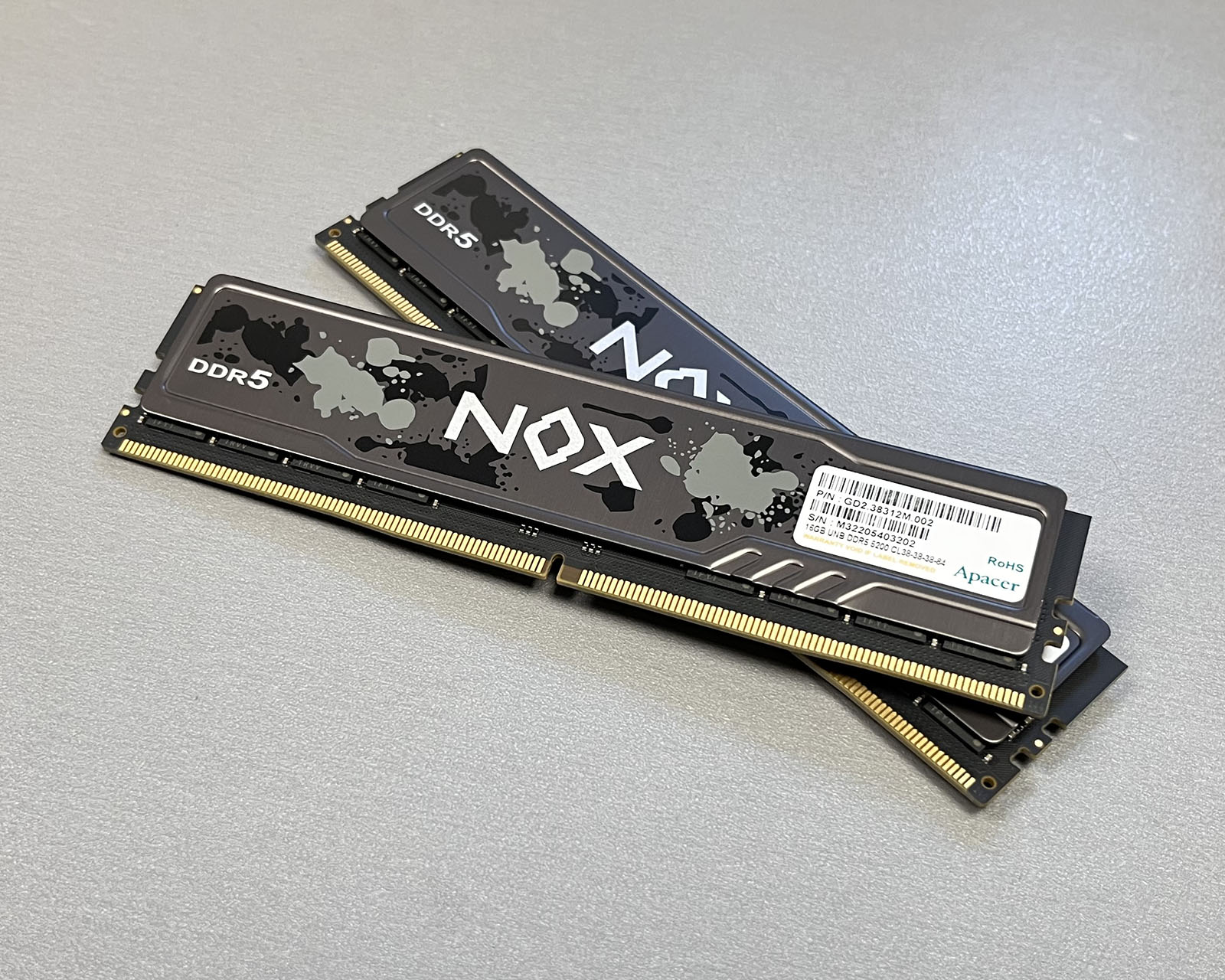 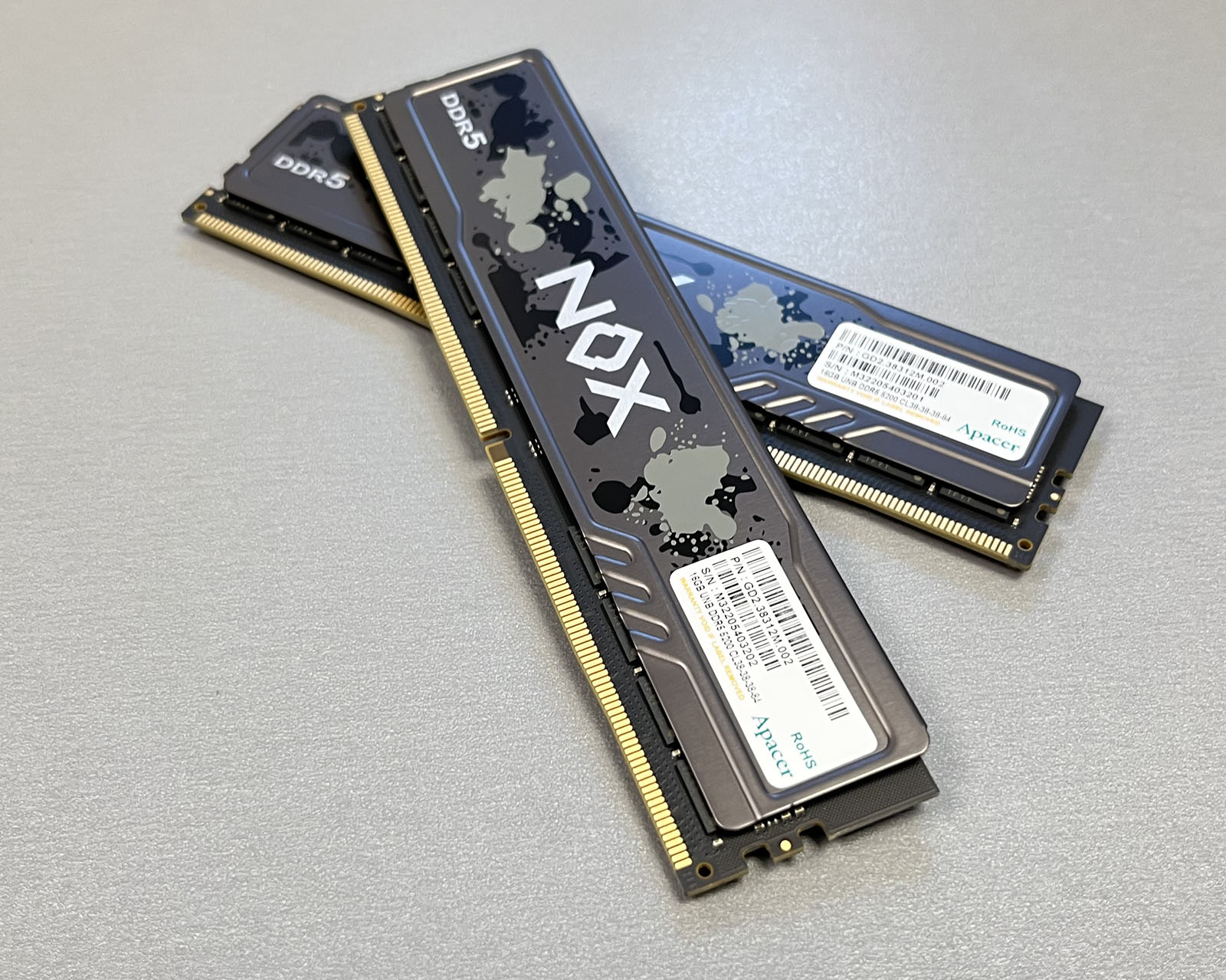 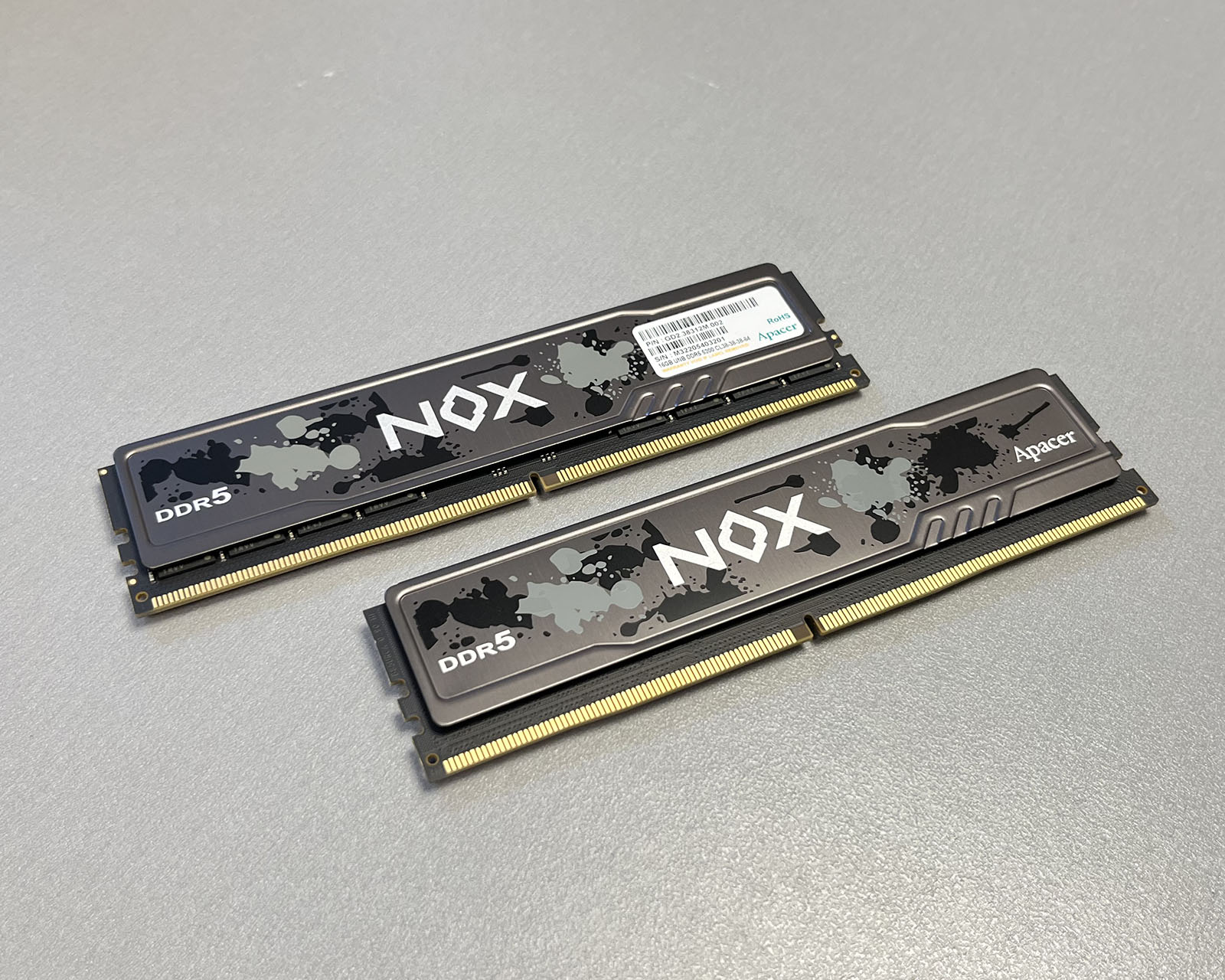 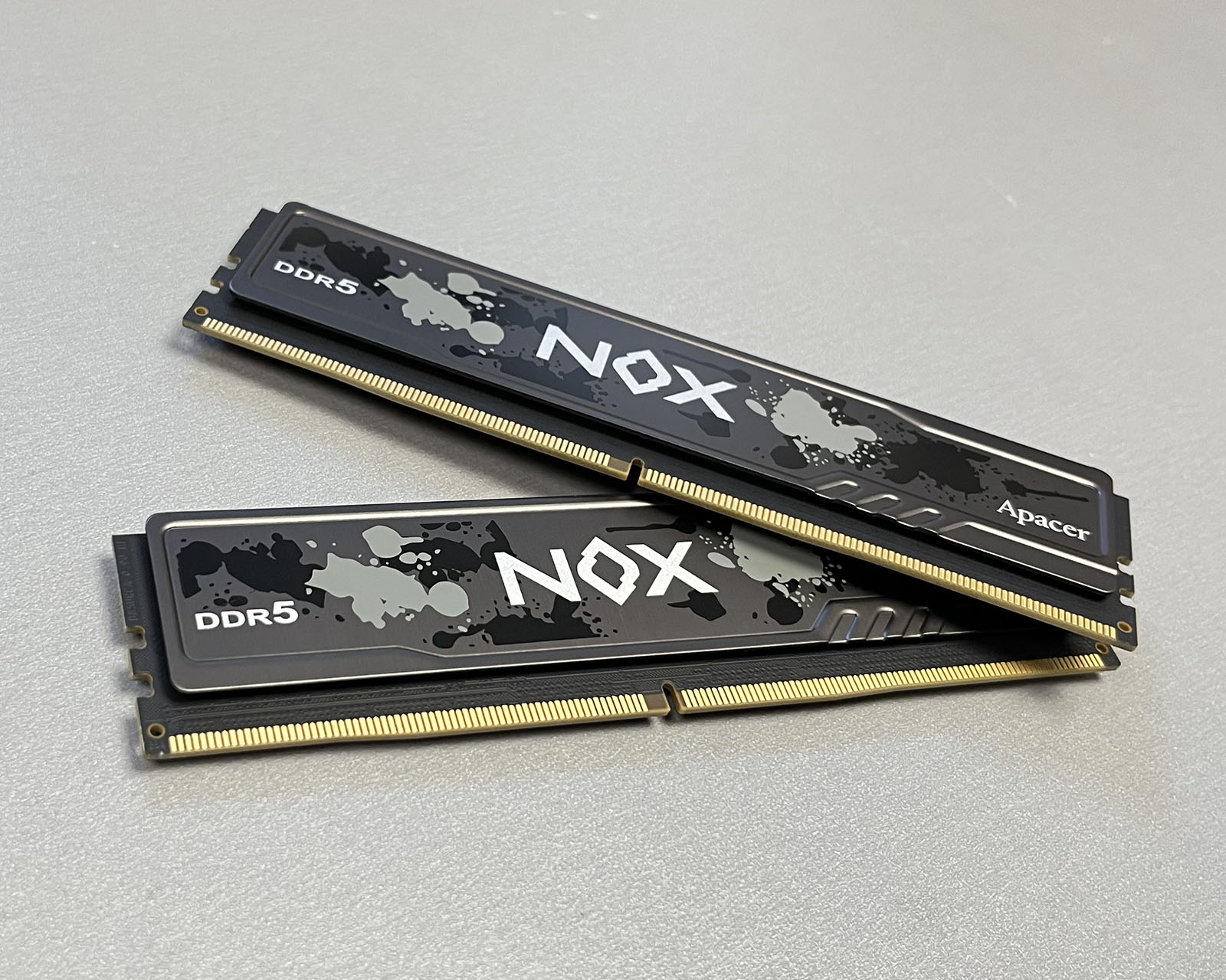 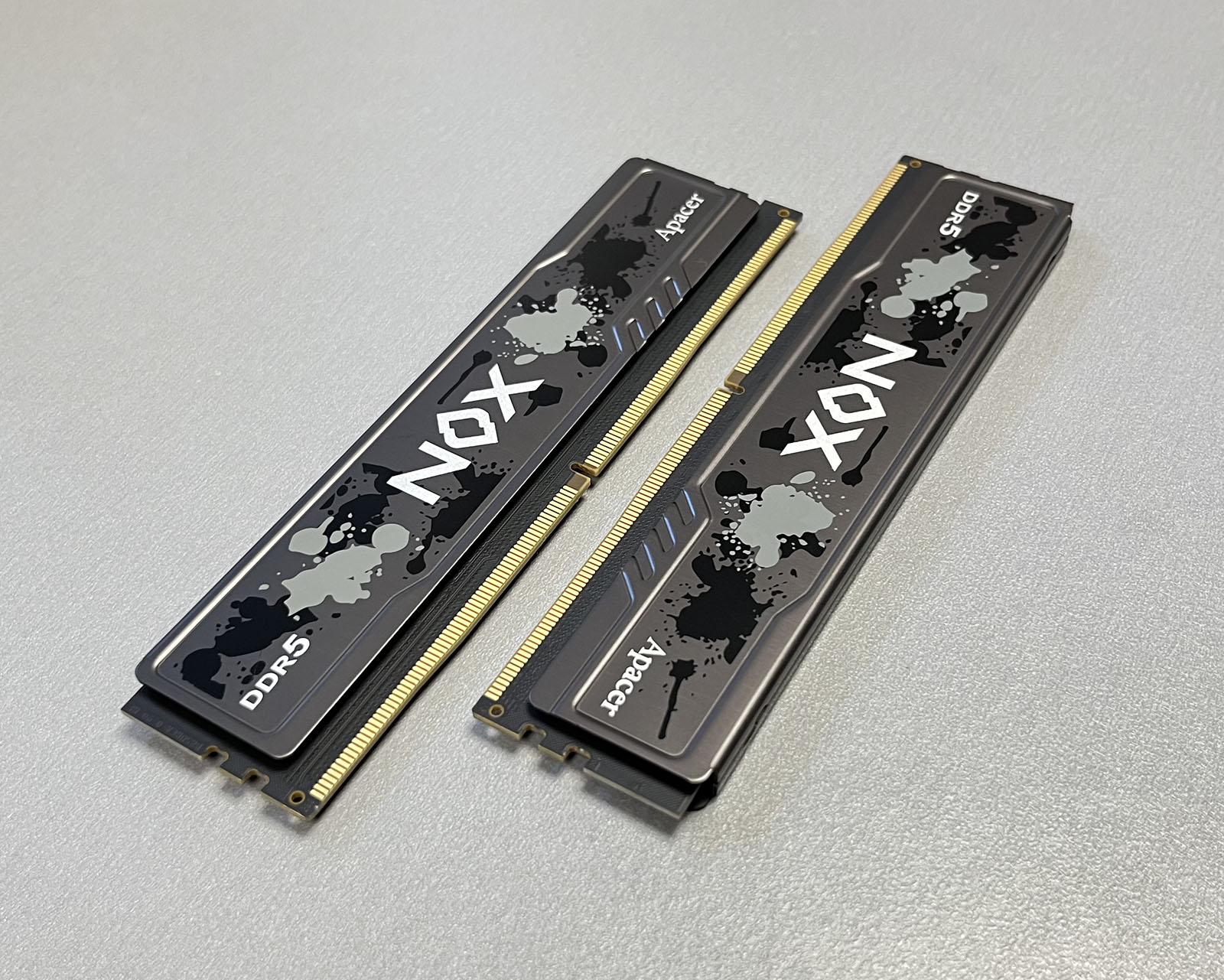 Memory modules have relatively standard heatsinks, but the design causes them to look pretty good and original. Not every PC has to be full of RGB illumination, and I’m sure many users pick modules like the NOX just because they don’t have RGB LEDs, which will be slightly cheaper.

On the next page of this review, we will take a closer look at the performance.
Performance

Our comparison includes overclocking results and settings where the Apacer NOX 32GB DDR5-5200 memory kit was stable. The maximum stable frequency using the mentioned motherboard was DDR5-5600 CL38-42-42 1.25V. Results with MSI Z690 Unify-X and Aorus Z690 Master were about the same.

We will start with the AIDA64 Memory and Cache benchmark, probably the best application to check memory bandwidth and latency.

AIDA64 bandwidth results are high, even at the XMP profile, but we can’t compare them with top DDR5 kits. On the other hand, higher memory frequency is not helping much, as you may find out in the following tests.

Latency results are much better than at standard or JEDEC settings. Again, they will be much better for higher frequency memory kits as latency is scaling with memory frequency and timings.

In PCMark 10, we can already see that overclocked settings are not much better, so I assume that most users won’t waste time on overclocking and stability testing.

3DMark series benchmarks are showing similar results in all settings. We can tell which one is higher or lower, but most are closer to the error margin.

In VRMark, we can see a 1FPS difference between all our settings. This is not changing much, even at higher series memory kits.

The same barely visible differences are in Final Fantasy XV and Superposition benchmarks. We can’t make much more to gain higher performance on these fast platforms with already fast RAM.

Results in benchmarks based on popular games are usually showing higher differences. In this case, overclocking isn’t high enough to see that difference, and we are limited to a 1FPS gain. I highly doubt that overclocking would improve the user’s experience.

Apacer NOX DDR5-5200 is already fast at XMP settings, but those who want something more can read a couple of words about overclocking on the next page.
Overclocking

Disclaimer: Overclocking is never guaranteed, so that the results may vary depending on certain conditions and hardware configurations. I am not recommending overclocking if you do not know what you are doing. High voltages may damage hardware, and the warranty will not cover it.

Apacer NOX DDR5-5200 memory kit is based on Micron IC, which is known to have its limits at about DDR5-5400. Our memory kit could go one step higher and reach DDR5-5600. This is, however, a maximum, also for booting. 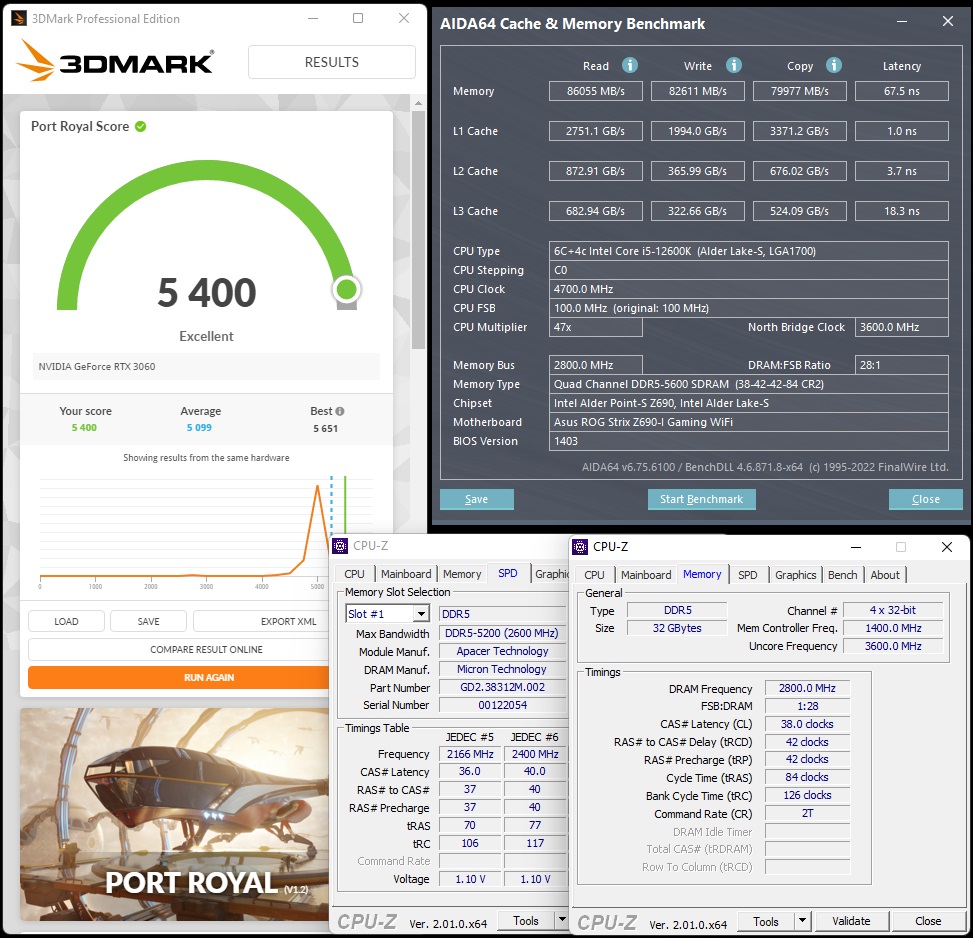 Micron IC also doesn’t like high voltages, so even though Apacer used Richtek PMIC that is unlocked on most popular motherboards, going above 1.25V isn’t helping much. About the same results are at 1.25V and higher VDD/VDDQ voltages.

I assume that higher frequency NOX memory like DDR5-6000 uses a different IC and offers higher overclocking headroom. If you are searching for more extreme memory series, you can look at the ZADAK offer. Hopefully, we will show you one of the ZADAK memory kits in the upcoming weeks.

The overclocking of the Apacer NOX DDR5-5200 memory kit is quite limited. Still, I doubt many users will play with additional settings as the performance gain from new RAM overclocking is quite disappointing. DDR5, regardless of its frequency, is fast and delivers high performance for all modern platforms. The NOX memory is faster than the standard memory series, so even XMP should satisfy most users. 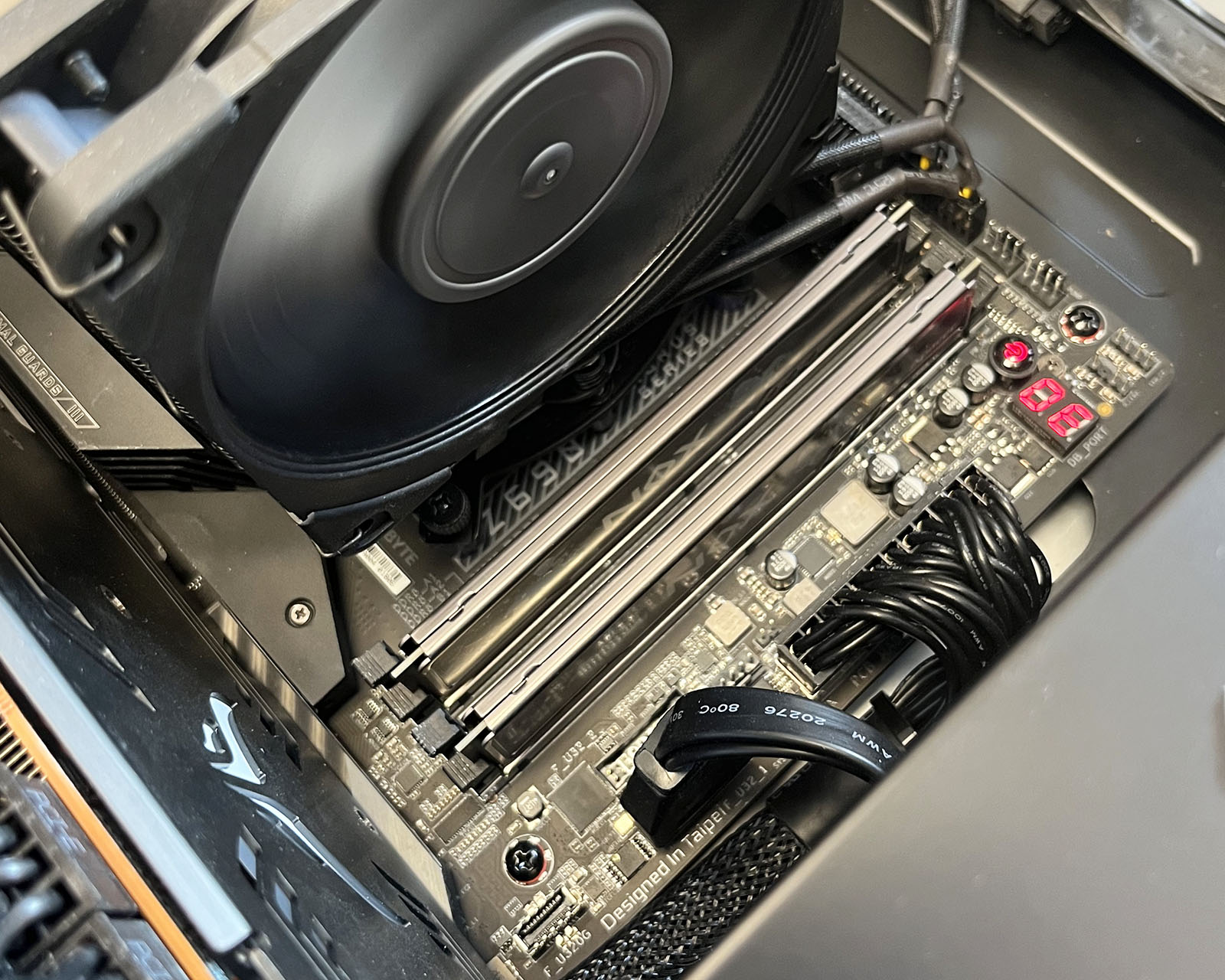 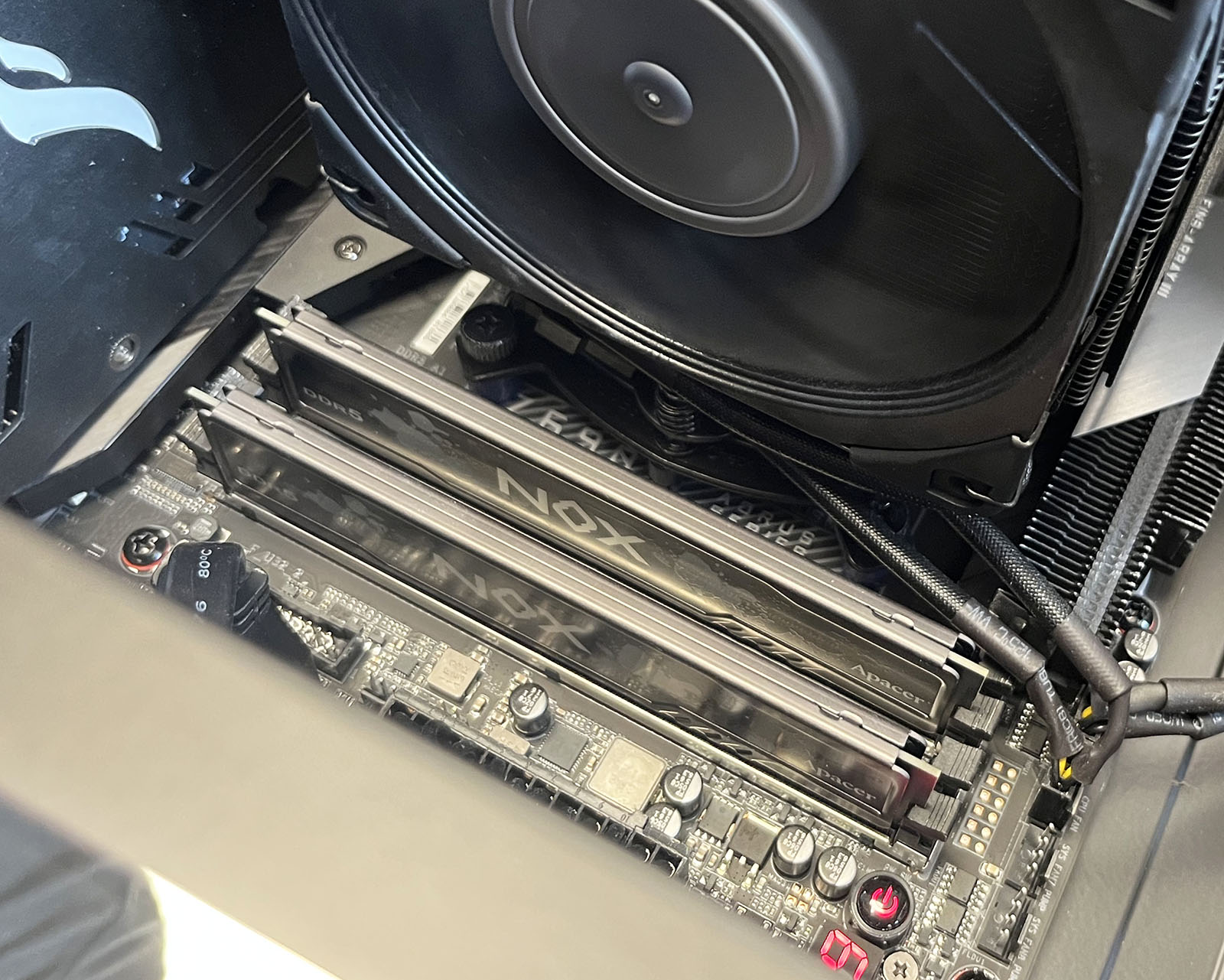 Apacer NOX 32GB DDR5-5200 memory kit seems like a perfect option for less demanding gamers who still want high performance for their new computers. The NOX is fast, stable, and compatible with probably all available motherboards (with DDR5 support). It doesn’t have RGB illumination, and its overclocking headroom isn’t high, but these are things less important for most gamers. The most important is that the NOX is fast out of the box, and it works without issues and manual settings, so it saves the time that we can use playing games.

There were no problems during tests on three different motherboards.

Currently, it’s hard to find Apacer NOX in any retail store, but this situation will change soon. It will surely be one of the most affordable DDR5 series, so with the upcoming AMD and Intel platforms, it can be a very interesting option.