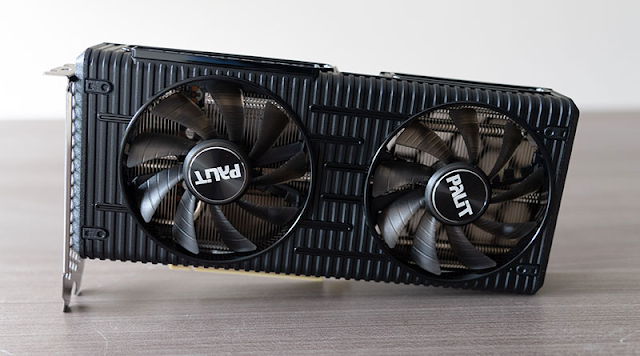 The reference price in the United States is 249 US dollars. At the time of publication, in Peru, the PALIT RTX 3050 Dual model costs US$649.

Honestly, the current price (at the time of publication) of all GeForce RTX 3050 are not AT ALL ATTRACTIVE and we hope one day to see a price reduction close to MSRP. We do not have information on the FOB price under normal market conditions.

The PALIT GeForce RTX 3050 Dual model comes with two fans and the good news for many users is that it has a semi-passive mode. This means that the fans will not spin until the GPU reaches a certain temperature.

This is good, as non-semi-passive models wear out faster as the fans never stop spinning.

It also comes with a backplate, although it’s plastic. In our tests, this did not raise concerns that the VRAMs would heat up to a worrying temperature, not even remotely close.

Finally, for RGB lovers, it comes in the part where the GeForce RTX logo is.

We are in the process of updating and modifying games, but in the meantime, the list we have focuses on several titles that use both DirectX 11 and DirectX12. Our test bench has been changed recently, so the data we have is quite recent.

Before detailing our configuration system, let’s refresh a little what they are AVG FPS, 1% LOW y 0.1% LOW.

AVG FPS (Average FPS): As the name says, it is the average number of frames per second within a specific sequence. It is the most used measure, but it does not detail the whole story, since there are FPS drops.

1% LOW: Within an entire frames per second dataset, the 1% LOW is the value equal to the lowest 1% within the frames dataset (of the specific sequence ordered ascending). In simpler terms, it is the frame where you see the FPS drop that exists within a specific sequence.

Our revamped test bench features the processor Intel Core i9-12900KF with the P-Cores to 5.1 GHz, the E-Cores disabled and the Uncore at 4.0 GHz.

The focus is on achieving 100% video card performance (or the processor not being the bottleneck).

Being a twelfth generation processor from Intel, it has support for PCIe Gen 5.0, but the video card works at PCIe Gen 4 per its specifications.

Here the summary of our test bench.

T.video (what we are testing): PALIT GeForce RTX 3050 Dual

We will eventually remove this title, as lately the results it generates for us are not accurate. Just take as an illustration.

Shadow of the Tomb Raider (DX12)

The two titles to try are:

Control, using only Ray Tracing, there is a 38.25% reduction in average FPS (68 FPS vs 42 FPS). It is a drastic reduction, which is consistent with using Ray Tracing on NVIDIA GeForce RTX cards. Now let’s see what the result is when adding DLSS (720p, Quality) to the equation.

It is quite interesting that by using DLSS in this game, we get higher average FPS than just rasterization. There is a slight improvement of 4.4% more average FPS on this title, which is impressive using AI upscaling and using the highest in-game Ray Tracing settings.

At the moment, the Metro Exodus (normal) version does not have Ray Tracing support. I assume that the Enhanced Edition must have the Ray Tracing option activated.

The most important aspect of a video card, apart from its performance, is how “hot” it can be or has acceptable dissipation. Also the sound of noise and consumption are two elements to consider when choosing a specific model of video card.

The PALIT GeForce RTX 3050 Dual video card maintains quite low temperatures and its two-fan solution for this model is quite good. We do not see any problem with the decision made by PALIT.

Rather, they can probably use this same dissipation on an overclocked RTX 3050 model and still maintain fairly cool temperatures for a graphics card.

Surprisingly the noise levels of the PALIT GeForce RTX 3050 are quite low (that’s good). Dissipating 130W of TGP is not difficult, but in any case, those who opt for this model will have a very pleasant experience.

Consumption is a decision factor of little importance to the end user in most cases, but it gives information on what differences there may be between a model of one brand versus another. Compared to the model we used for the main NVIDIA GeForce RTX 3050 review, the EVGA GeForce RTX 3050 XC Black, the PALIT model consumes slightly more (nothing alarming really).

We guess the difference is in the PALIT’s LEDs, as the XC Black lacks any RGB lighting.

Those who have doubts about the quality, performance, temperature and noise generated by the PALIT GeForce RTX 3050 DUAL video card, can feel relieved after seeing all these results. The video card has no problem.

I was quite impressed with the result in temperatures, since it is the first time I have tested a model of the brand. While dissipating 130W is not difficult, in certain rare cases a manufacturer can make mistakes (not the case).

That it has a semi-passive mode in the fans is another point in favor of the brand, if we would not have unnecessary wear and tear on them. The backplate is plastic, which may not be to everyone’s taste, but it’s better than having the back PCB exposed.

In terms of noise, it does not generate much and is quite quiet. Now let’s talk about two problems, one directly linked to PALIT and the other to the local situation.