Something to look forward to: AMD has updated its Zen 4 roadmap to show what will be replacing its current Ryzen 6000 (Rembrandt) series of mobile chips. The very D&D-sounding Dragon Range and Phoenix APUs will be part of the Ryzen 7000 line and, like their desktop siblings, will come with PCIe 5.0 support.
AMD, which this week posted record quarterly revenue, is pushing Dragon Range’s gaming laptop credentials in the slide. In addition to the Zen 4 architecture, it will also have the highest ever core/thread count and cache for a mobile gaming CPU. No specifics on exactly how many Zen 4 cores it will boast, but there have been rumors that it could reach as high as 16. 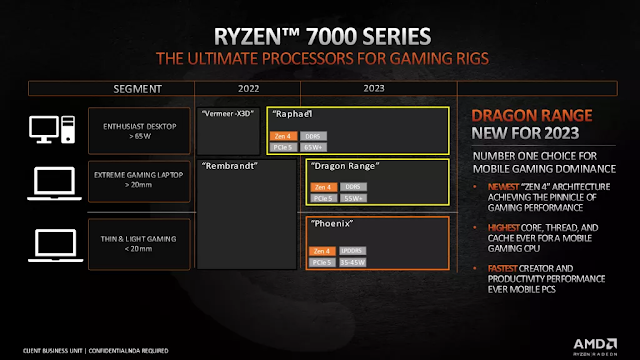 Additionally, Dragon Range will support full DDR5 memory as opposed to being limited to LPDDR5, as is the case with the Phoenix APUs. It also has a TDP of 55W and higher, but there’s no confirmation of its graphics specs or what manufacturing node it uses.
While Dragon Range is designed for the beefier gaming laptops, Phoenix APUs are set to power the thin and light models—thinner than 20mm, according to AMD. These APUs have a TDP that lands in the 35W to 45W range and lack full-fat DDR5 support.
AMD’s roadmap also shows that the Zen 4 Raphael Ryzen 7000 desktop chips will arrive in the second half of the year with PCIe 5.0 support and a TDP of 65W and higher. They also support DDR5, though a recent report suggests the processors might only support the latest memory modules and not offer an option to use DDR4, as Intel does with Alder Lake.