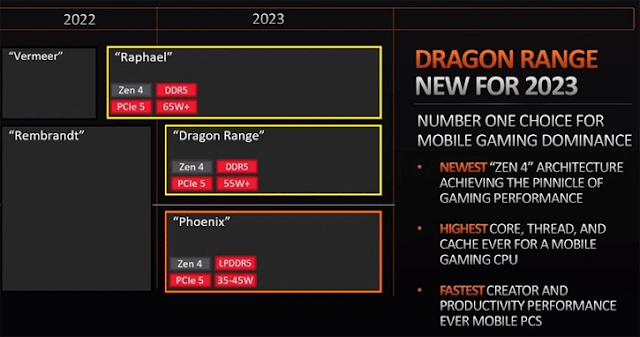 Raphael-based desktop CPUs from AMD will be available before the end of the year. Two new mobile Ryzen 7000 CPUs will be offered beginning in 2023: Dragon Range and Phoenix. All of them are Zen 4 CPUs.The Ryzen 7000 desktop CPUs (Raphael) are set to launch in the fourth quarter of this year with TDPs starting at 65W; however, AMD has not set a release date. In 2023, AMD will also release two Ryzen 7000 CPUs for laptops. These processors are from the Dragon Range and Phoenix lines. The Dragon Range CPUs are designed for “extreme gaming laptops,” whilst the Phoenix CPUs are designed for thin and light laptops. There are no release dates for these new items. The TSMC’s 5nm technology ZEN4 based CPUs come along the introduction of socket AM5. DDR5 and PCI Express 5.0.

AMD has already teased a small glimpse of Ryzen 7000 (Raphael), indicating that the processors will be available before the end of the year to replace the Ryzen 5000 (Vermeer) stack, we may see a late September debut. Raphael, in a nutshell, introduces Zen 4 to the consumer market by leveraging TSMC’s 5nm production node and the new AM5 platform. Unfortunately, the AM5 platform may be too expensive for customers, as many sources reveal that Raphael will only support DDR5 memory, which is already available at a significant price.