MSI’s next-generation motherboard portfolio won’t be cheap. MSI currently offers four X670 motherboards ranging in price from $290 to $1300. Only one non-Extreme board is mentioned (PRO X670-P WIFI), and it is also the cheapest. 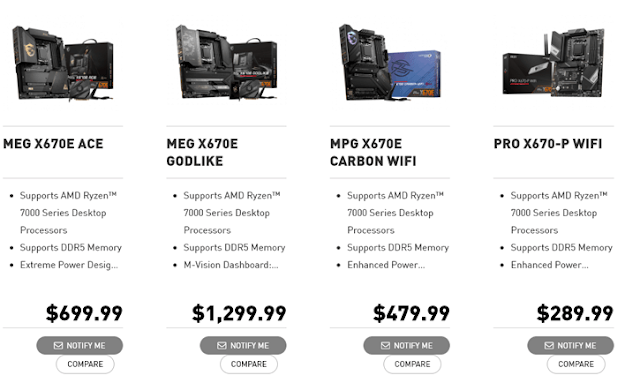 For the mid-range MPG series, the MSRP for the MPG Carbon board is at least 480 USD. MSI MEG, the company’s flagship series, will be priced between 700 and 1300 USD. These are the costs for the MEG ACE and MEG GODLIKE, which come with certain extras like an M.2 Expander card and an OLED display (GODLIKE). The PCIe Gen5 interface will be supported by the X670E series for both the PCIe x16 interface (graphics) and the M.2 slot (storage). The X670 non-Extreme series only has dedicated Gen5 M.2 slot compatibility.