AMD’s AM5 Will Launch With Only DDR5 Support for Ryzen 7000, Dual-Chipset Design 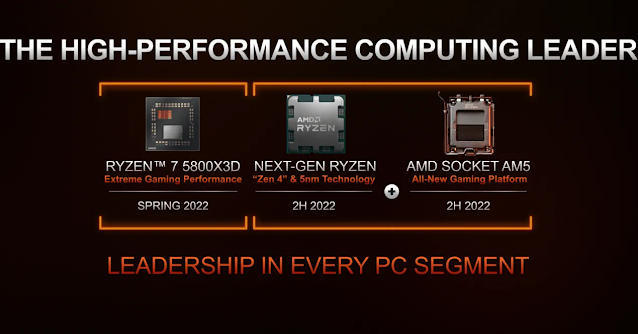 All signs indicate that AMD’s next-gen AM5 socket platforms that will house the 5nm Ryzen 7000 ‘Raphael’ processors will only support DDR5 memory when they arrive later this year, but it isn’t official. However, we have now confirmed through multiple sources in the supply chain that the X670 and B650 AM5 platforms support only DDR5 memory, which has pricing implications for platforms built around AMD’s upcoming Zen 4 processors. Additionally, we’ve also confirmed that AMD has moved to a chiplet-based design for the chipsets for its AM5 motherboards, so some models will come with two chipset dies.

Given the long-lived eye-watering pricing we’ve seen for DDR5 memory, AMD’s choice to only support DDR5 could prove to be a disadvantage in the face of Intel’s Raptor Lake, which we have confirmed will continue to support both affordable DDR4 and expensive DDR5 memory, enabling two pricing tiers for Intel platforms.

AMD has already announced that its AM5 socket platforms, which will replace the aging AM4 platform, will support the PCIe 5.0 and DDR5 interfaces as we see with Intel’s Alder Lake — but AMD hasn’t confirmed that DDR4 support isn’t an option. Our sources tell us that the X670 and B650 motherboards have no provisions for DDR4 support, and it isn’t yet clear if Ryzen 7000’s memory controllers even support DDR4. If they do support DDR4, AMD could have plans for lower-tier A-Series motherboards with DDR4 support, but we’re told that doesn’t seem likely.

DDR5 continues to be far more expensive than DDR4, and for little to no performance gain in many applications. While DDR5 availability and pricing have improved over the last few months, DDR5 marks the first generation of mainstream memory with onboard power management ICs (PMICs) and VRMs. Unfortunately, those have been in constant shortage due to the pandemic.

To highlight the current difference in pricing, below you can see a quick comparison of two low-end kits (DDR4-3200/DDR5-4800) and two higher-end kits (DDR4-4000 (for Gear 1 OC)/DDR5-6400). As you can see, the low-end and high-end DDR5 kits are well over twice the price of comparable DDR4 kits, and we don’t think those types of premiums will end any time soon. 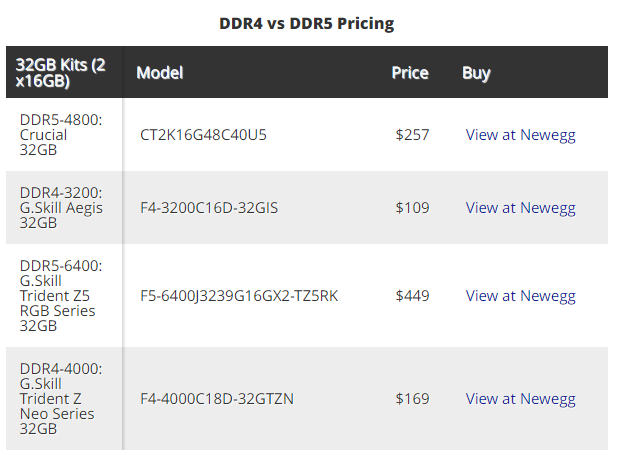 Micron expects PMIC/VRM supply to rebound in the second half of 2022, so we could see the situation improve as AMD’s Zen 4 Ryzen 7000 processors come to market, but it is best to temper your expectations. DDR5 pricing will fall as PMIC and VRM supply improves, but recent China lockdowns and ever-increasing lead times indicate it could be some time before we see that come to fruition. Additionally, DDR5’s more complex power circuitry and design mean that these modules will continue to command a premium over DDR4. DDR5 also has in-built ECC mechanisms for data at rest, which requires additional dies to provide the same memory capacity as DDR4. Though the pricing differences will become smaller over time, DDR5 will remain more expensive than DDR4, regardless of supply.

That means Intel will likely have a platform pricing advantage with readily-available DDR4 platforms, and that will pay off the most in the high-volume mid-range and low-end segments.

If it’s any consolation, AMD has said that it has focused on DDR5 overclocking performance with its Zen 4 Ryzen 7000 platform, saying “[…]speeds that you maybe thought could not be possible, may be possible with this overclocking spec.” Additionally, although we don’t see massive performance gains with DDR4 vs DDR5 on Intel platforms, AMD’s Zen 4 architecture might extract more substantial performance gains from the speedier memory. Time will tell.
AMD Chiplet-Based AM5 Socket Chipsets and Motherboards

Last week a report emerged suggesting that AMD will use a dual-chiplet design for AM5 platforms. ASMedia, AMD’s long-term chipset partner, will provide the chips (fabbed on TSMC 6nm). We confirmed that the dual-chipset design applies only to the X670 platform, while B650 motherboards (and presumably A-series) will come with only one chip.

AMD’s mainstream B650 platform will come with a single chipset chip that connects to the Ryzen 7000 CPU via a PCIe 4.0 x4 connection, though documents we’ve seen say that a PCIe 5.0 connection is available on some AM5 processors. This single chip provides eight lanes of PCIe 4.0 (four lanes for M.2 storage), four SATA ports, and a number of USB ports.

Meanwhile, the enthusiast X670 platform employs two of these chips (our sources confirm the chips are identical, not a north/southbridge-type arrangement), effectively doubling these connectivity options. This stands in contrast to AMD’s approach with the current 500-series motherboards, which use different chips for the X- and B-series motherboards. The new approach will obviously provide cost and design flexibility advantages.
The Bigger Picture

AMD’s current Socket AM4 has soldiered on from 2017 to today, housing five generations of chips spanning from Excavator to Zen 3 and supporting both the PCIe 3.0 and 4.0 interfaces. However, while the AM4 platform has earned the company plenty of kudos from enthusiasts — you can upgrade a motherboard from 2017 with the current best CPU for gaming that was released a mere ten days ago, the Ryzen 7 5800X3D — that longevity has limited the company’s ability to move forward to the most advanced connectivity options, giving Intel’s Alder Lake the upper hand.

Timing a memory transition to coincide with affordable pricing is incredibly difficult, even in the best of times, and the ongoing global chip shortage was unforeseen a few years ago when AMD’s Zen 4 chips were entering the design stages. AMD is obviously plumbing its AM5 socket for a long life span, so adding in support for what will soon be an older interface, DDR4, could require tradeoffs and design compromises that wouldn’t make sense over the long term.

However, AMD’s decision to use DDR5 exclusively means you might have to pony up some extra cash compared to competing Intel Raptor Lake platforms, at least with the inaugural Zen 4 Raphael chips for Socket AM5. As a result, much like we saw with AMD’s high-priced debut for the Ryzen 5000 processors (AMD just finally released lower-cost Zen 3 chips a year and a half later), you can expect to pay a premium for AMD’s Ryzen 7000 platforms when they arrive later this year.