NVIDIA Ada GPUs for GeForce RTX 40 series will include at least 5 different processors. This information has already been confirmed through leaked documents (NVIDIA hack). Said documents revealed CUDA configuration and increased L2 cache sizes of each GPU, such information would still otherwise be a domain of speculation. What has not been known until now, however, was how many PCI Express lanes each GPU has. 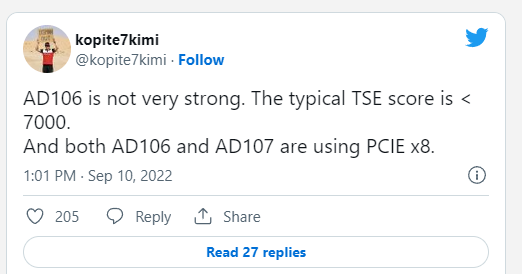 According to Kopite, both AD106 and AD107 will have 8 PCIe lanes. The leaker previously mentioned PCIe Gen4, but one might expect Gen5 at this point, especially when Hopper architecture already supports the newer standard. Should AD106 be used with Gen5 for RTX 4060 series, that would be the same bandwidth as Gen4 x16 on RTX 3060.

The only scenario where this should be considered a downgrade is when the system or GPU do not support Gen5. In that case, the bandwidth will drop from 32 GT/s to 16 GT/s. However, that should still have a small impact on performance. The AD107 would reportedly also support 8 lanes only. The current model (GA107) is already limited to 8 lanes.

If rumors are to be believed, neither AD106 nor AD107 are to launch this year. NVIDIA is currently working on AD102, AD103 and AD104 GPUs set to launch in the coming months. Kopite is also mentioning that AD106 performance is now estimated at 7000 points in 3DMark Time Spy Extreme, which is ‘not very strong’ in his words. However, that is still in a territory of RTX 3070 series performance.